Characters are how players interact with the world of Avendar.  You pretend you are another person in another land, and other complete newbie concepts. Read more about being a complete newbie in the guide for new players.

Your character’s race determines what classes and alignments are available to you. Your race may also provide a few extra abilities, resistances, and/or vulnerabilities. Your maxium stats are limited by your race. A detailed comparison of the races is on the races page. 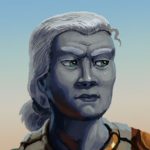 Cursed by the gods for their hubris, alatharya are giant, silver-skinned humanoids with a tragic past. 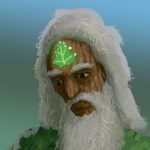 A philosophical people, the caladaran are tall and have bark-like skin. 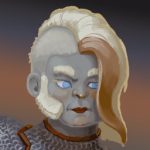 Chaja are hirsute, underground giants, enslaved for generations by the shuddeni.

Semi-translucent humanoids from another plane, the ch’taren are golden-hued and shimmering. 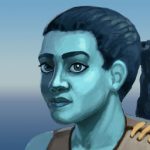 Short, stout, and brightly colored, the ethron live in the wilds with a strong tradition of respect for nature.

Plentiful and diverse, the humans were the latest to dominate the continent before the Republic of Earendam dissolved. 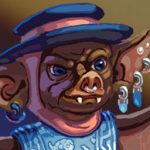 Flying on their bat-like wings, nefortu favor tricks and cunning over brawn.

The lizard-like srryn dominate the swamps with muscle and magic. 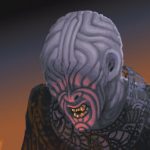 Each character in Avendar has an adventuring class. The class determines the character’s abilities. Guilds are established throughout the land to help train characters in their class’s abilities. See the main Character Classes page for more detailed descriptions of each class, or click a link below to go directly to a class’ page.

You must ‘practice’ your skills at your guildmaster! Your attacks will miss even the lowliest creatures if you do not practice!

The profession of warrior is perhaps the oldest of the adventuring classes. Students of the arts of war and physical combat, warriors come in three different backgrounds.

The profession of rogue is populated by the quick-witted and the secretive, who prefer to live by their keen wit and nimble fingers. Rogues come in three different traditional professions.

Scholars are sages who have devoted their life to the study of the various elemental magics. Their area of specialization is determined early in life, where they choose major and minor spheres of elemental influence.

Those who choose the profession of naturalist have, through one way or another, associated their fortunes with that of nature’s. While not necessarily defenders of nature, all naturalists are at home there, and use the pecularities of the wild to their advantage.

The mentalist profession is for those whose affinity is for the mind. Foregoing the ways of elemental magic, they instead embrace the potential of psionics.

Your statistics (stats) determine the degree of your character’s physical and mental aptitudes. Stats range from 3-25, with all characters creating at -6 from their racial maximums. Statistics can be permanently improved by spending trains, or temporarily improved by items or affects. These can be improved whenever you have a train, and its effects are retroactive (for example, if you improve your constitution later, your hp will improve for all of your previous hit dice). All skill practicing in the game is based on one or two statistics related to the skill’s nature. Your current value in those statistics determines the percent you gain for each practice spent.

You must ‘train’ your stats at your guildmaster! Prioritize constitution first for more hit points, then train stats relevant to your class.

Your dexterity represents your speed, agility, and overall response time.

Constitution is a measure of your total health and vigor.

Your intelligence determines your ability to analyze and solve problems, as well as the ability to learn and memorize facts.

Your wisdom measures your intuition, creativity, and ability to make generalizations based on your own individual observations.

Your charisma measures those indefinable personality traits which tend to influence others to seek out your presence, ideas, and opinions. While it is not completely correlated to physical attractiveness, it is rare to encounter a highly-charismatic individual who is actively unpleasant to behold. Charisma also defines how inspirational of a leader you are.

Determines:
Bonus to group if leading
Enemies may pause before attacking
Effectiveness of some skills

Alignment is a broad-strokes reflection of your character’s stance among the factions and powers of Avendar. There are moral and personality components to alignment in Avendar, but it is also a force of nature. Magical elements have affinities for different alignments, as do the races, gods, great houses, and so forth. More detail is provided in the Alignments page.

Use ‘consider’ to see the alignment of a mob. Good characters get extra xp for killing evils, but negative xp for killing goods. Consider before you attack!

Your character’s starting location is where you fast travel to when using the recall command, or the ‘word of recall’ spell. You also return there as a ghost when killed.

Centrally-located, Var Bandor is divided into four quadrants. To the south, the merchant council and scholar council each dominate their own quadrants, while the rest of the city lives north, next to the belching forges of Iron Street or crammed in the slums.

The oldest human city, Earendam the Grand was the seat of an empire. Today, the city stands on its trade and sophistication. Historic guilds and luxury shops lie tucked along every twisting street. More difficult to navigate, Earendam requires greater time to learn its streets and plazas.

Other locations are available to certain races, classes, and alignments. In character creation, the locations you qualify for will be listed.

Traits represent additional class features available to a newly created character. Many classes automatically receive one or more traits for free during creation, and the traits possessed by a character are shown in score. Often, traits represent an ability that a class should have that is not powerful enough to be a skill in its own right.

You also have the option to select traits on creation. This allows you to gain abilities that would otherwise not be available to your class. However, to gain traits in this way, a character must spend some of their initial trains. In general, the power of a trait is reflected in the number of trains required to obtain it. It is best to be conservative when spending trains on traits– remember that these trains will also be used for valuable stat points.

There are four categories of traits: background, general, magical, and physical. There are also god touches, chosen at the very end of character creation.

You can choose to be marked by a god. The mark, or god touch, represents a god’s notice of your character. Your character need not religiously follow that god in play. It provides mechanical bonuses, and is visible to all players who look at you.

Characters who chose “new to Avendar” during creation do not have access to traits. This is to prevent new players from being tempted to spend too many trains. Trains far more applicable to general gameplay than traits. The cost-benefit analysis is best done by players who have some experience with Avendar.

See the Newbie Guide for what to do after creation.

Avendar is a roleplay required MUD. This means you should stay in character at all times. While in character, you should speak and act as your character would. This is a game of pretend, and a large part of the enjoyment comes from imagining yourself in someone else’s shoes.

You may discuss mechanics in non-numerical terms, such as “This sword will make you hit harder,” not “this sword has +2 damroll.”

Please confine out-of-character chat to the newbie and OOC channels.

Later on, you will be required to provide a description and background for your character. You may play the game for the first 10 levels without needing a description. Characters below level 10 are not expected to have a strong sense of character yet. It is a time to learn the basics of the game.

When you reach level 10, you will need to describe your character’s appearance. A description is required before your character can progress to higher levels.